If you’ve added the artificial sweetener sucralose (brand name Splenda) to your diet because you think it’s a healthy alternative to sugar, you’re being dangerously misled. Research from the Ramazzini Institute has linked the popular sugar alternative to cancer, specifically leukemia.

The findings were first presented at a London cancer conference in 2012 and prompted The Center for Science in the Public Interest (CSPI) to downgrade Splenda from its “safe” category to one of “caution.”

Now that the study has been published in a peer-reviewed journal, CSPI has again downgraded Splenda, this time from “caution” to “avoid.”

Splenda May Increase Risk of Cancer in Mice

The researchers fed mice Splenda beginning prenatally and continuing for their entire lifespan. The mice were fed varying concentrations of the artificial sweetener: 0 ppm (parts per million), 500 ppm, 2,000 ppm, 8,000 ppm or 16,000 ppm.

A significant increase in cancerous tumors was seen among male mice, and the risk increased along with the dose. The risk of leukemia in male mice also significantly increased, especially at Splenda doses of 2,000 to 16,000 ppm.1 According to the study:

“These findings do not support previous data that sucralose is biologically inert. More studies are necessary to show the safety of sucralose, including new and more adequate carcinogenic bioassay on rats.

Considering that millions of people are likely exposed, follow-up studies are urgent.”

CSPI explained that the only other long-term feeding studies conducted on Splenda were conducted by its manufacturer. The new study, they said:2

” … [I]s more powerful than the industry-funded studies, which tested fewer animals, started exposing the animals beginning at adolescence as opposed to in utero, and ended earlier in the animals’ lives.”

After more than a decade, CSPI has finally gotten it right about Splenda in recommending that consumers avoid it. For the record, however, CSPI is generally an organization whose guidelines need to be taken with a grain of salt.

For instance, while recommending that people avoid artificial sweeteners like sucralose, aspartame and saccharin, they still consider drinking diet soda to be safer than drinking regular soda.

Splenda Is Found in 4,500 Products

If you’d like to heed the warnings and cut Splenda from your diet, be aware that it’s found in more than 4,500 products. Splenda has been smartly marketed, and it’s most known for its tag line “made from sugar so it tastes like sugar.”

It’s earned a reputation for being somehow safer than other artificial sweeteners like aspartame, which is why PepsiCo ditched aspartame in its Diet Pepsi in 2015 and replaced it with none other than Splenda.

Splenda became one of the top-selling artificial sweeteners in the U.S. in a very short period of time. Between 2000 and 2004, the percentage of U.S. households using Splenda products jumped from 3 percent to 20 percent. By 2012, Splenda generated sales of nearly $288 million.3

But make no mistake; Splenda is far from natural, even though it technically does start off as a sugar molecule. In the five-step patented process of making sucralose, three chlorine molecules are added to a sucrose or sugar molecule.

A sucrose molecule is a disaccharide that contains two single sugars bound together: glucose and fructose. The chemical process to make sucralose alters the chemical composition of the sugar so much that it is somehow converted to a fructose-galactose molecule.

This type of sugar molecule does not occur in nature, and therefore your body does not possess the ability to properly metabolize it. As a result of this “unique” biochemical make-up, the manufacturers claim that Splenda is not digested or metabolized by your body, making it have zero calories.

Splenda is supposed to pass right through you. However, the research (which is primarily extrapolated from animal studies) indicates that about 15 percent of sucralose is, in fact, absorbed into your digestive system and ultimately stored in your body.

Splenda May Decimate Your Gut Bacteria

If the potential cancer finding isn’t enough to sway you away from this toxic artificial sweetener, be aware that Splenda may wreak havoc on your gut bacteria, which could have an untold number of consequences on your health.

An animal study published in the Journal of Toxicology and Environmental Health, for instance, found that Splenda reduces the amount of beneficial bacteria in rat intestines by 50 percent while also increasing the pH level.

It also affected a glycoprotein that may affect the way certain drugs are metabolized by the body.4 The researchers explained:

These changes occurred at Splenda dosages that contained sucralose at 1.1 to 11 mg/kg (the U.S. FDA Acceptable Daily Intake for sucralose is 5 mg/kg).

Evidence indicates that a 12-wk administration of Splenda exerted numerous adverse effects, including (1) reduction in beneficial fecal microflora, (2) increased fecal pH, and (3) enhanced expression levels of P-gp, CYP3A4, and CYP2D1, which are known to limit the bioavailability of orally administered drugs.”

Splenda May Have Neurotoxic Effects and Is Found in Water

Research published in 2014 detailed Splenda’s oxidative effects and suggested the sweetener may have neurotoxic properties.

The researchers, who assessed the effects of sucralose on water fleas, concluded that: “exposure to sucralose may induce neurological and oxidative mechanisms with potentially important consequences for animal behavior and physiology.”5

The enzyme acetylcholinesterase is found in all animals, and for researchers looking for possible effects that artificial sweeteners like Splenda might have on animals and humans, this new information was disturbing.

If for no other reason, that’s why it’s so important to find out the consequences of Splenda exposure sooner rather than later, as the chemicals have already been detected in municipal effluents and surface waters in both the U.S. and Europe.6

Far from being an inert substance, research also shows that Splenda affects your body’s insulin response. When study participants drank a Splenda-sweetened beverage, their insulin levels rose about 20 percent higher than when they consumed only water prior to taking a glucose-challenge test.7

Blood sugar levels also peaked at a higher level, “So the artificial sweetener was related to an enhanced blood insulin and glucose response,” researchers noted, adding:8

“Although we found that sucralose affects the glucose and insulin response to glucose ingestion, we don’t know the mechanism responsible. We have shown that sucralose is having an effect. In obese people without diabetes, we have shown sucralose is more than just something sweet that you put into your mouth with no other consequences.

What these all mean for daily life scenarios is still unknown, but our findings are stressing the need for more studies. Whether these acute effects of sucralose will influence how our bodies handle sugar in the long term is something we need to know.”

When you eat something sweet, your brain releases dopamine, which activates your brain’s reward center. The appetite-regulating hormone leptin is also released, which eventually informs your brain that you are “full” once a certain amount of calories have been ingested.

However, when you consume something that tastes sweet but doesn’t contain any calories, like an artificial sweetener, your brain’s pleasure pathway still gets activated by the sweet taste. However, there’s nothing to deactivate it since the calories never arrive.

Artificial sweeteners basically trick your body into thinking that it’s going to receive sugar (calories), but when the sugar doesn’t come your body continues to signal that it needs more, which results in carb cravings.

Contrary to industry claims, research over the last 30 years — including several large-scale prospective cohort studies — has shown that artificial sweeteners stimulate appetite, increase cravings for carbs, and produce a variety of metabolic dysfunctions that promote fat storage and weight gain — often to the researchers’ great surprise.

For instance, a 2010 review published in the Yale Journal of Biology and Medicine revealed the correlation between increased usage of artificial sweeteners in food and drinks and the corresponding rise in obesity. More than 11,650 children aged 9 to 14 were included in this study. Each daily serving of diet beverage was associated with a body mass index (BMI) increase of 0.16 kg/m2.

You can see the trends for yourself in the Yale Journal of Biology and Medicine graphic below, which clearly refutes the beverage industry’s claims that artificially sweetened diet soda aids weight loss. 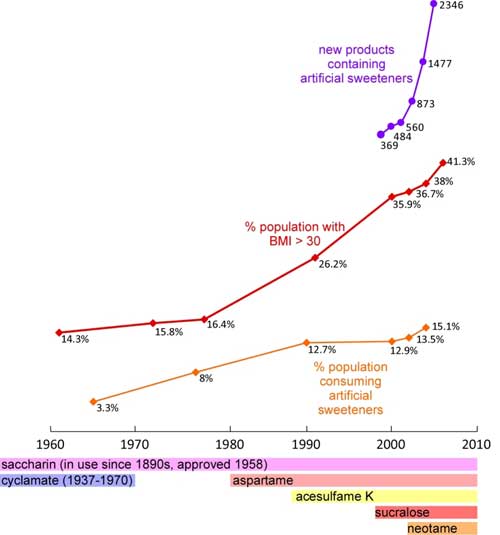 Are There Safer Artificial Sweeteners?

I recommend avoiding artificial sweeteners of any kind, as each is linked with its own risks. Aspartame is perhaps the most dangerous of the bunch. At least it’s one of the most widely used and has the most reports of adverse effects. There are also hundreds of scientific studies demonstrating its harmful effects.

Sugar alcohols are another option on the market. They can be identified by the commonality of “ol” at the end of their name, such as xylitol glucitol, sorbitol, maltitol, mannitol, glycerol, and lactitol. They’re not as sweet as sugar, and they do contain fewer calories, but they’re not calorie-free. So don’t get confused by the “sugar-free” label on foods containing these sweeteners.

One reason that sugar alcohols provide fewer calories than sugar is because they’re not completely absorbed into your body. Because of this, eating too many foods containing sugar alcohols can lead to abdominal gas and diarrhea. It’s also worth noting that maltitol, a commonly used sugar alcohol, spikes blood sugar almost as much as a starchy new potato.

Xylitol, in comparison, does not have a great effect on your blood sugar, so from that perspective it may be a better choice. In moderation, some sugar alcohols can be a better choice than artificial sweeteners like Splenda and aspartame. Of the various sugar alcohols, xylitol is one of the best. When it is pure, the potential side effects are minimal, and it actually comes with some benefits such as fighting tooth decay.

All in all, I would say that xylitol is reasonably safe, and potentially even a mildly beneficial sweetener. As a side note, xylitol is toxic to dogs and some other animals, so be sure to keep it out of reach of your family pets.)

That being said, two of the best natural sugar substitutes are from the plant kingdom: Stevia and Luo Han Guo (also spelled Luo Han Kuo). Stevia, a highly sweet herb derived from the leaf of the South American stevia plant, is sold as a supplement. It’s completely safe in its natural form and can be used to sweeten most dishes and drinks.

Luo Han Kuo is similar to Stevia, but it’s a bit more expensive and harder to find. In China, the Luo Han fruit has been used as a sweetener for centuries, and it’s about 200 times sweeter than sugar.

How to Break Free From Artificial Sweeteners

First, I highly recommend trying an energy psychology technique called Turbo Tapping, which has helped many “soda addicts” kick their habit, and it should work for any type of sweet craving (or diet soda craving) you may have. A few other tricks to try to kick your sugar cravings:

• Exercise: Anyone who exercises intensely on a regular basis will know that significant amounts of cardiovascular exercise is one of the best “cures” for food cravings. It always amazes me how my appetite, especially for sweets, dramatically decreases after a good workout.

I believe the mechanism is related to the dramatic reduction in insulin levels that occurs after exercise. Additionally, if you do eat sugars or fruits around the time of the exercise, your sugar levels will not rise as it will metabolized for fuel

• Organic, black coffee: Coffee is a potent opioid receptor antagonist, and contains compounds such as cafestrol — found plentifully in both caffeinated and decaffeinated coffee — which can bind to your opioid receptors, occupy them and essentially block your addiction to other opioid-releasing food.9,10 This may profoundly reduce the addictive power of other substances, such as sugar.

• Sour taste, such as that from cultured vegetables, helps to reduce sweet cravings, too. This is doubly beneficial, as fermented vegetables also promote gut health. You can also try adding lemon or lime juice to your water.